On May 7th, Fennel Blythe, Native Seed Coordinator with Friends of the Verde River traveled to New Mexico for the New Mexico Native Plant Farm Tour. She had the privilege of attending an informative and inspirational farm tour sponsored by the Institute for Applied Ecology, directed by Melanie Gisler and coordinated by Maggie Parrish. Friends of the Verde River Native Seed Co-op has a partnership with the Institute for Applied Ecology through the Southwest Seed Partnership. The Native Seed Co-op collected high priority native seed for the partnership in 2016/2017 and currently has three native grass and pollinator plant seed increase fields in production in the Verde Valley, totaling 1 acre. The purpose of the tour was to familiarize partners with sustainable native plant production strategies and methods. 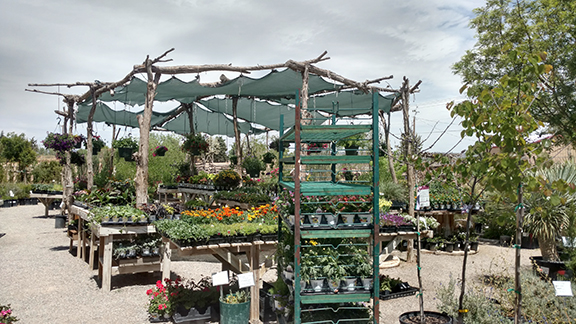 The tour began at the Santa Ana Native Wholesale Nursery at the Pueblo of Santa Ana, New Mexico. The nursery focuses on the reclamation sector of native plant production. Some the nursery’s major clients include the Pueblo itself, the National Park Service, and regional Bosque ecosystems. Nursery Manager Mike Halverson and Reclamation Manager Nathan Schroeder gave us a background on the evolution of the nursery and its role in providing quality native plant materials to the region. We received a tour of the nursery and were introduced to the production process they have for growing out native plants from seed to container. Reclamation Manager Nathan Schroeder indicated that they have not had much success with using seed in the reclamation process but instead use the container grown plants. Melanie Gisler gave us a brief overview of a new way of using seed in lieu of container plants through a hydro-seeding process used by the New Mexico Department of Transportation which increases the success of direct seeding.

After the nursery tour we were introduced to a composting program the Pueblo has implemented to handle the debris from restoration activities and is working on a bagging system in order to sell the compost. We also visited a restoration site at the Pueblo and discussed challenges facing the process from drought and lowering of the water table to difficulties in sustaining labor to manage restoration activities. 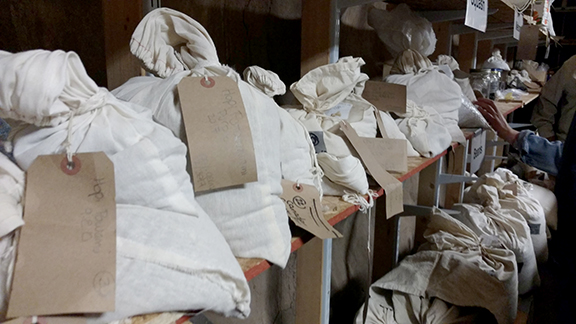 Following our Santa Ana Pueblo tour we visited Tesuque Pueblo where we were hosted by Emigdio Ballon. Emigdio was featured in the documentary ‘Seed: The Untold Story’ highlighting the urgency of seed saving as our planet undergoes climate change as well as the threat of genetically modified seed potentially threatening the integrity and natural genetic diversity of wild seed. We began our tour of Tesuque’s farm at the seed bank. Emigdio and his crew built a sustainable seed bank using the earth’s own energy. They dug into the ground to create a safe place to store seed using old tires filled with the earth as structural components reinforced with adobe. The earth keeps the seed bank at a constant temperature suitable for storage without any need for artificial cooling from resource demanding systems. 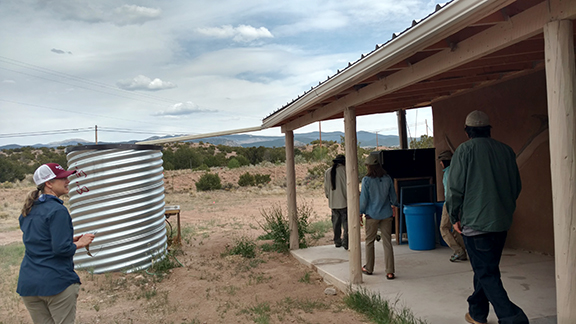 The building also boasts two 5,000 gallon rainwater collection containers, solar panels for electricity and a solar fueled plant dryer. The building also takes advantage of a passive solar design for growing a small medicinal plant and food garden on its east side. We also visited the farm’s orchard and greenhouse facility where they grow food for the Pueblo. The greenhouses were also a major highlight of our tour as they boasted ancient Incan building technology, again utilizing the earth’s own energy system to sustain life. Underneath the greenhouses they installed a system of pipes for collecting heat in the summer. As winter sets in, the pipes naturally release heat into the greenhouses for year round production without the need for artificial heat sources. We saw a wide variety of plants being grown in the greenhouses from medicinal herbs to vertical strawberry production. It was an amazing tour full of thought provoking ideas on creating sustainability in the Verde Valley. 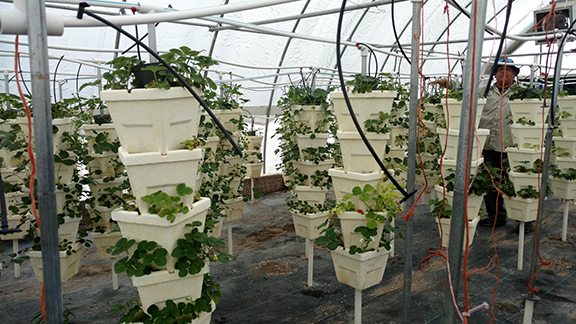