Management of stormwater, or surface runoff, is essential in urban areas where runoff cannot infiltrate into the ground due to large amounts of impermeable surfaces that increase the volume and rate of runoff compared to undeveloped areas. Communities adopt stormwater regulations that require developers to install stormwater management features to reduce the rate and volume of runoff, to remove pollutants to reduce impacts to streams as required by the Clean Water Act, and to protect residents and property from floods.

Traditional stormwater management diverts surface runoff to a detention pond that holds the water. The pond can also return water to the watercourse at a higher volume over a longer period of time because its main purpose is to drain peak flows away from an area. 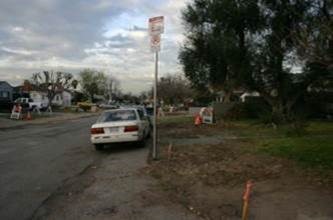 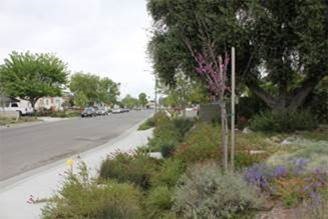 Due to drought, climate change, and limited water resources, communities are recognizing that stormwater can be managed as a valuable resource that can recharge groundwater and maintain stream flow, rather than as a nuisance that must be conveyed downstream through conventionally constructed structures.

Most communities are required to prepare a stormwater management plan depending on how stormwater is discharged, but these are done to ensure compliance with state and federal water quality regulations and are not comparable to a long-term plan to manage and use stormwater as a water resource. Community-scale long-term stormwater planning is essential to identify opportunities to improve stormwater use and to guide development of necessary policies and investments. These efforts should be conducted with water resource planners because stormwater should be considered part of the community’s water portfolio and, depending on how it is used, can reduce current and future water demand.

Though one of the largest cities in the United States, Los Angeles’ approach to stormwater planning can serve as a model for smaller communities as it set supply goals, addressed stormwater use at several levels, and involved considerable public and institutional input. Its Stormwater Capture Master Plan provides planning level guidance on projects and programs to increase stormwater capture in order to reduce its reliance on imported water, including from the Colorado River, by 50% by 2024.

Most of the precipitation that falls on Los Angeles and flows from the watershed in nearby mountains is channeled through storm sewers and dry river beds, discharging to the Pacific Ocean. To develop this new water supply, the City intends to implement both centralized and distributed capture projects that consist of three main categories: 1) recharge of the local groundwater aquifer by increasing stormwater recharge in flood control and recharge facilities; 2) construction of green streets projects that infiltrate stormwater runoff from neighborhoods; and 3) lot-scale rainwater harvesting.

An example of a successful pilot neighborhood-scale program is the Elmer Avenue project, which captures runoff from a small urban watershed, reducing potable water use for landscape irrigation by 30% and infiltrating 5.4 million gallons of water a year.

Los Angeles has already retrofitted existing flood control structures to infiltrate stormwater for aquifer recharge, and new large-scale facilities will be developed with a recharge purpose; however, opportunities for centralized capture are limited because of space requirements. The City recognizes that for distributed projects to substantially benefit aquifer recharge, a city-wide program must be implemented that could consist of the following alternatives: