On Saturday, June 2, 2018, Friends of the Verde River, The Nature Conservancy, REI, Arizona State Parks, and City of Cottonwood hosted volunteers from Prescott, Verde Valley and Phoenix metropolitan area to improve riparian habitat and recreation sites.   This project was funded by REI and The Nature Conservancy.

Volunteers had the choice of working on four distinct projects:

Jail Trail Signage: The Jail Trail connects Old Town Cottonwood to Dead Horse Ranch State Park and River Front Park. This shaded mile walk brings hikers through the Cottonwood/Willow Gallery Forest along the Verde River. Volunteers did the heavy lifting involved to get the sign posts in place so hikers have a better understanding of the unique riparian habitat of the Verde Valley. 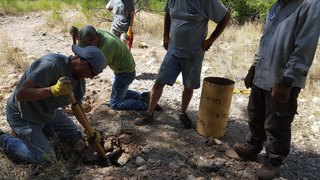 Tuzigoot National Monument: Adjacent to Dead Horse Ranch State Park, Tuzigoot National Monuments boasts one of the few intact pueblo ruin in the Verde Valley. Volunteers started at Dead Horse Ranch State Park and walked to the monument along the Verde River. They then worked with park staff to remove invasive plants at Tavasci Marsh in an effort to support and encourage native vegetation.

River Front Park: Volunteers blazed a new trail! Along the Cottonwood Ditch that runs along the boundary of River Front Park, volunteers began the first phase of starting a new trail that runs behind the Dog Park and Community Garden and winds its way to the Verde River at the 10th Street Bridge. This trail will be another wonderful way to find some shade along with some beautiful scenery.

The day ended with a wonderful BBQ at Dead Horse Ranch State Park where more then 30 volunteers spent the night under the star! As usual, REI came through with great raffle prizes! After a hot day working in the sun Saturday, 16 volunteers joined the Verde River Institute for a float down the Verde River. It was a wonderful way to spend the day! Floating with our Friends on the Salt RiverBlog, Friends News, Purdy Verde Blog